One of the most consistent traits of individuals who perform acts of monstrous evil is their capacity for being simultaneously unremarkable and ridiculous. Kim Jong-Il was responsible for perpetuating the system of immiserating Stalinist repression and satanic gulags that infest the North Korean state. He also publicly claimed a world-record golf handicap and maintained a status as the world’s single-largest purchaser of Hennessy cognac. Joseph Goebbels was a darkly amoral propagandist who headed the public-relations apparatus for the Nazi genocide machine. He was also a fidgety, easily agitated man, and when he saw a British parody film in which producers had set Nazi marches to whimsical dance music, Goebbels immediately ran out of the screening room while shrieking obscenities and throwing chairs like an enraged toddler.

Ramzan Kadyrov, the standing dictator of Chechnya, is a second-generation death squad commander and Putin lackey. He’s known for his pitiless cruelty and brutality toward any and all perceived political enemies. He also enjoys taking taking selfies and recording videos of himself working out despite being a rather goofy-looking sort with the physique of a potato.

Bashar al-Assad looks like a nervous substitute teacher. Joseph Stalin looked like someone’s jovial uncle. And Ramzan Kadyrov looks like a smiling doofus who films himself on the treadmill and named his pet dog “Tarzan.” (“Tarzan” is apparently female.)

Hannah Arendt is widely cited for her analysis of Nazi logistician Adolf Eichmann’s unremarkable personality—an observation that lead to her famous remark about the “banality of evil.” Eichmann was not a snarling cartoon, or a flamboyantly malevolent persona who cackled while plotting the Final Solution. He was a mousy bureaucrat who engineered genocide with all the theatricality of a tax attorney.

Ramzan Kadyrov has been accused of ordering the killing of celebrated anti-Putin dissident Boris Nemtsov, a middle-aged father of four. There are allegedly videos of a man bearing a damning resemblance to Kadyrov beheading soldiers during the Second Chechen War. He is, by all accounts, a compulsively homicidal figure whose name has been attached to murder throughout every step of his life. Yet he also maintains one of the most personal and aggressively jovial social media presences of any head of state today. Online, Ramzan Kadyrov looks oddly similar to your least intelligent friend from college who grew up and somehow fell into a successful marketing career.

Kadyrov’s Instagram account has a following totaling more than 1.8 million users – a figure that rivals some of America’s most visible celebrities. As a point of comparison, Chechnya’s standing population was little more than 1.25 million as of 2010. Kadyrov’s social media presence extends well beyond those in his nation of birth and into the Russian-speaking world as a whole. It’s an astounding feat of subtle whitewashing. It makes Kadyrov seem friendly and acceptable, not through the usual means of outright lies and manipulation, but simply by making him look so staggeringly unremarkable that it’s hard to imagine this grinning cheeseball perpetrating atrocities.

When you comb over Kadyrov’s Instagram account, you notice a series of running themes—his puppy-like adoration of Putin, his obsession with fighting sports, assertions of nationalistic pride, and rather inane displays of piety and good cheer. One of Kadyrov’s most liked Instagram posts is merely a photo of him holding a baby lion, captioned with a heart emoji. None of these are in any way reminiscent of, for example, cutting off someone else’s head.

It’s not uncommon for Kadyrov’s posts to open with “As-salamu alaykum!”, a friendly salutation used between Muslims that translates roughly to “Peace be upon you.” In fact, the usage of this phrase is so common it starts to look like a sort of social media tic. It also goes without saying that Kadyrov doesn’t actually spend much time attempting to visit peace upon others.

To give some background to Kadyrov and his ascent as Chechnya’s current dictator and #1 Vladimir Putin fan, his family crawled to power out of the ashes of the Second Chechen War. When an empire begins to crumble, its satellite states will agitate for secession at the first sign of opportunity—turning perceived weakness or distraction into a point of severance. Chechnya fought viciously for autonomy during the post-Soviet era, eventually achieving de facto independence for a nearly three-year period from 1996-1999 along with the full removal of Russian military presence. This came to a brutal halt during the Second Chechen War when Russia, under the guidance of Vladimir Putin as newly elected Prime Minister, attempted to reassert territorial control. 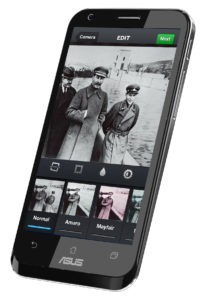 The Second Chechen War was less of a prolonged conflict and more of a harrowingly brutal shock operation aimed at crushing local resistance. While the primary combat phase only lasted from summer 1999 to spring 2000, civilian fatalities at the hands of pro-Russian forces are alleged to have reached into the tens of thousands. Once Russia’s scorched-earth policy achieved its intended effect, Putin promoted a particularly loyal death squad commander named Akhmad Kadyrov to the upper echelons of government. Akhmad soon become the president of Chechnya in 2003, but was assassinated by Chechen Islamists only months thereafter as an act of revenge. (Chechnya tends to produce uniquely capable jihadis, by contrast with the klutzes and blunderers that often emerge from France or England.)

Enter young Ramzan, stage right. Both slavishly loyal to Putin and enthusiastically violent, the younger Kadyrov proved an ideal successor. Moscow propelled him up the ranks in a manner similar to his father, with Ramzan being appointed supreme leader of Chechnya at the tender age of 30.

Predictably, Ramzan acted much like a death squad commander would when handed absolute power. He’s known for assassinating not just political opponents, but even members of the Chechen state apparatus who criticize him at all. His loyal paramilitary squads, referred to as Kadyrovtsy (it’s good to have a brand name), are known for wantonly terrorizing anyone who might offer the slightest dissent. Their uniting purpose seems to be cementing the power of the Kadyrov clan through the most horrific means possible. Kadyrovtsy were once accused of displaying the severed head of an anti-government partisan in the village of Kurchaloi as warning to the locals who might be tempted to make any gestures against Kadyrov’s rule. Some of the bravest people in the entire Russian Federation are prone to dying horrible deaths the moment they start to criticize Kadyrov, and Kadyrov has been accused of personally participating in tortures and executions.

One should adopt a balanced perspective though. It’s true that local beheading statistics seem to escalate precipitously whenever Kadyrov comes to town. On the other hand, a few months ago Kadyrov endearingly took to Instagram to ask followers to help him find his missing cat. As of this writing, no one has been able to locate Kadyrov’s cat, which probably makes him very sad. This is Ramzan and his cat, in better days: 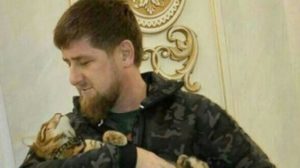 It should be noted that Kadyrov is rumored to have a private prison on his own compound where dissidents are known to disappear, never to return.

One of the most lasting impressions from Kadyrov’s Instagram is how easy it can be for revoltingly evil figures to hide their crimes behind an innocuous front. This is far from new. Autocrats throughout history have leaned heavily on the most up-to-date, relevant forms of propaganda to make themselves seem relatable and charming. Dictators on social media may seem faintly absurd, but it’s simply the logical contemporary update of an ancient tactic. What’s most unsettling about Kadyrov’s Instagram account is how successful it is at channeling this age-old methodology through contemporary social media. Because it’s so difficult to reconcile Kadyrov the smiling cat fancier with Kadyrov the wanton beheader, it becomes harder to imagine the brutality that goes undocumented. The unspoken rule behind this style of misdirection is that the cheerfulness of a despot’s propaganda often corresponds directly with the magnitude of their atrocities.

This can even be seen in the case of the Syrian Civil War. Bashar al-Assad has been responsible for significantly more civilian murders than ISIS has—despite ISIS making every attempt to advertise themselves as menacing, lethal, and dangerous. Assad presented himself as an even-handed statesman, all the while executing a military policy centered on massacring civilian populations loyal to the rebel opposition. During the harrowing earlier days of the Syrian Civil War, observers would occasionally remark on the dissonance of Assad’s well-composed, patrician social media presence. No matter the scale of murder occurring under Assad’s watch, his various Instagram postings still broadcasted little more than benign magnanimity.

Kadyrov simply takes this to its logical next step. His online presence shows a man who has murdered dissidents with his own hands playing with his dog and wishing the faithful a peaceful Ramadan. Brutal regents throughout history have had few better assets at their disposal than the power of distraction and public posturing. If you can mislead your subjects with one hand, it’s easier to commit murder with the other. It’s just that these days, the first hand is holding a smartphone.